Leading up to my currently ongoing European tour (concerts in Paris and Cologne); I  tweaked my meta-trombone yet again. 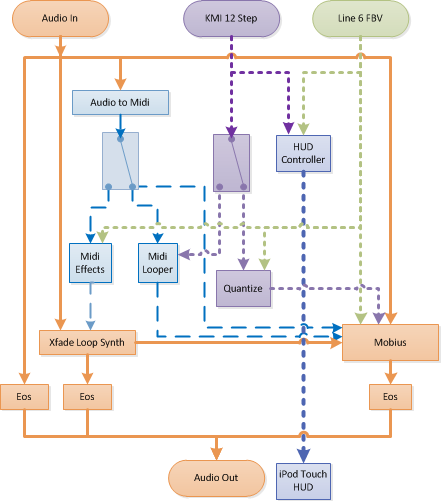 The trombone audio input goes to:
The audio to midi converter interprets the trombone performance and outputs midi notes.  Those notes are either sent to the Midi Looper (more on this below) or to the sampler.  Before reaching the sampler, some midi effects can be applied to the midi notes (Midi Delay and Cthulhu).  The output of the sampler goes to the audio outputs (with reverb) and the looper.

The KMI 12-Step controls either the Midi Looper or the Mobius Looper.  As commands are sent, the Head’s Up Display on my iPod Touch is updated (see image below).  I use the Line 6 FBV to change Mobius’ output volume, secondary feedback and playback rate.  I also use it to change the quantization setting of commands being sent to Mobius from the 12-Step.  As I change these parameters, the Head’s Up Display on the iPod is updated (four dials in upper left corner).  I select which parameter the pedal affects using the four switches on the FBV.  When a parameter is selected, its dial appears green on the iPod.  In this way, I can modify several parameters at the same time. 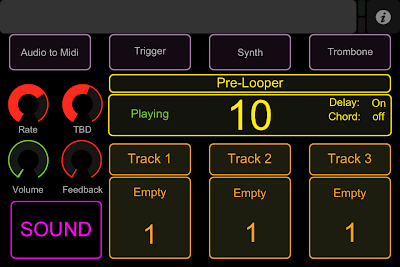 Finally, the output of the looper goes to audio outputs through reverb.  I have eliminated the post-looper effects, as they were more confusing than aesthetically satisfying.

The signal flow is only part of the story; to understand what is going on in a meta-trombone performance, I need to discuss the various performance modes.

In this mode, the midi notes interpreted from the trombone performance are sent to the sampler.  This mode is only relevant once a phrase has been recorded into the sampler during performance.  There are two sub modes: synth and trigger.  Synth will cause the sampler to playback the recorded phrase from where playback last stopped at a playback rate relative to the note being played (e.g. higher notes cause faster playback).  Trigger will cause the sampler to playback at a defined playback rate starting from one of sixteen positions within the phrase relative to the note being played.  The playback rate of the trigger mode can be modified during performance.

In this mode, the midi notes interpreted from the trombone performance are not sent to the sampler. Instead, they are sent directly to the Mobius looper and the Midi Looper.  Any given note will select a loop (1 through 4) and a starting position within that loop.  In this mode, I can “remix” all my loops together by playing trombone!

The midi looper can record those loops and since the output is sent to the looper, the “remix” I created in performance keeps going when I change mode or stop playing the phrase that gave it life.
I developed the Midi Looper in Cycling 74’s Max/MSP and the software is currently available for OS X (Windows support in the near future).