Last week I had the privilege to perform at the 12th annual Y2K Livelooping Festival in California.   This festival is, by nature and design, as eclectic and wonderful as organizer Rick Walker.  At times, it seemed performers shared nothing but an attentive audience and an interest in using the techno-musical wizardry of livelooping.

Among the 50+ excellent artists I had a chance to hear, there are a few that stood out for me:

The collegiality among the performers was a high point of my participation in this festival.  I had the occasion to enjoy discussing the philosophical aspect of improvised experimental music with Luca, sharing notes on the business side of music with Shannon, listening to Laurie tells us about her collaboration with Max Mathews, witnessing technical demonstrations from Emmanuel, Bill and Rick,  and listening to my housemate Paul Haslem practice on hammered dulcimer. 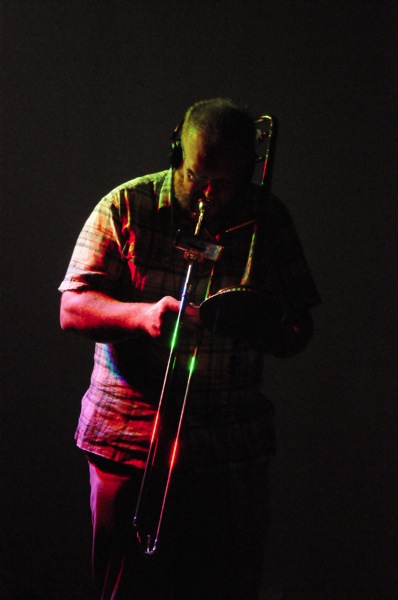 The Test of Performance

Personally, my participation in the festival was an opportunity to put my meta-trombone project to the test of performance.  As with any new performance system, there were both positive and negative points to these first two maiden voyages.  Encouragingly, I was quite satisfied with the varied timbres I could produce with the meta-trombone.  I also enjoyed the drone-like feel of some of the loops and I liked the hypnotic phasing I employed.

However, not everything went well.  My software crashed midway through my performance in Santa Cruz and I was forced to restart it. Thankfully, this is something I had practiced and I was able to keep playing acoustically on the trombone while the software came back online.  It did not take very long and many people told me they did not even notice the crash…

More problematic, as I listen to the recorded performances, I feel there is something missing.  I find the conceptual aspects of the meta-trombone quite stimulating, however conceptually interesting music does not necessarily translate to good music (music people want to hear).  I tend to get overly interested in the conceptual part, but I need to focus on the music now that the concepts are firmly in place.

I talked it over with other performers: Emanuel suggested I form a trio with a bassist and a drummer so that I could rely on them to anchor the narrative aspects; Luca thought I needed to think more about my transitions.  Both suggestions will need to be explored as I continue work on the meta-trombone.

I'm currently editing the recordings of my two performances into accessible short 'songs' for easy consumption.  While the meta-trombone still requires work, I feel that this point in its development is still worthy of documentation and I stand by the recordings I made in California.

One of the first things I want to develop further is role of the notation metaphor in the meta-trombone.  Currently, trombone performance is interpreted by the computer software and the notes that I play execute code (specifically Mobius scripts).  I would like to expand this by creating algorithms that will send notation to be displayed on my iPod touch based on what notes were previously played.  Since meta-trombone notes serve both as musical material and as control signals, the software will be able to suggest changes to either the music or the system states by displaying music notation.  I already have a working app that displays music notation on iOS in real-time through OSC and it is generating quite a bit of  buzz.  I'll have to integrate it into a performance software for iOS that will ultimately replace TouschOSC, which I currently use as my heads-up display (see photo above).

Another avenue for further exploration would be to diversify the computer code that can be executed by playing notes.  I have a couple ideas for this and I think I will turn to Common Music to help implement them.  Out of the box, Common Music can respond to a MIDI note-on message by executing a scheme procedure, so it will be easy to integrate into my existing system.

I'm also looking to perform more with the meta-trombone and I'm actively looking for playing opportunities.  There's a possible gig in New York City in mid April (2013), so if anyone can help me find anything else around that time in NYC, it would make it a worthwhile trip.