After a year of learning all I could about electronics, I have some results to show. I created my first effect pedal from scratch: the Hitchhiker Laboratories abattoir.

Before you send in your order, you have to understand that Hitchhiker Laboratories is not a real company; it’s what I call my basement studio. Furthermore, the abattoir is what I call this pedal I created, because I felt like giving it a name; it’s not a commercially available product at this time (if ever). 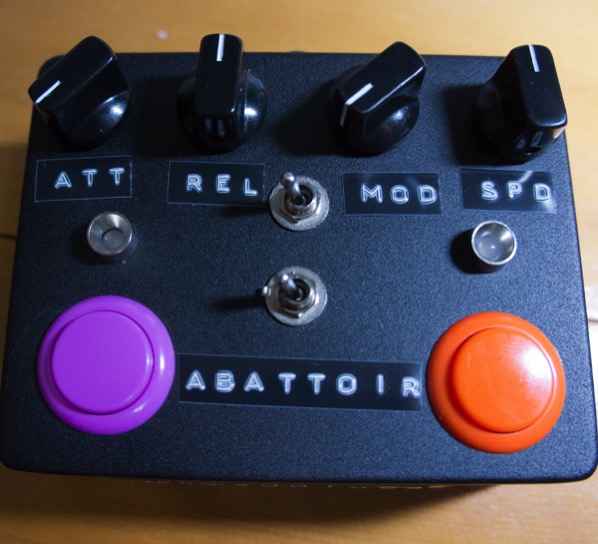 At its core, the abattoir is a vactrol based VCA with an attack and release envelope generator. In addition to the Attack and Release controls that set the envelope, there’s also a Mod control that affects both parameters at once. When Mod is turned fully counter-clockwise, the values of the Attack and Release knobs are used, but turning the Mod knob clockwise will gradually reduce the length of both the attack and release settings.

Pushing the purple button triggers the attack and releasing it triggers the release (left status LED light purple when the envelope is triggered). This can be used in one of two setting determined by the topmost toggle switch: 1) make (left) a sound or 2) break a sound. In the first setting, the audio sent to the pedal’s input is silenced unless the purple button is pressed, but in the second setting, the input audio is heard unless the button is pressed. In both cases, the envelope settings are used to control the vactrol VCA to make or break the sound. The abattoir’s envelope generator and vactrol VCA make it differ from other kill switch in that it can kill very smoothly. If you like the clicks, look elsewhere… the abattoir will never cause clicks of any kind.

While a sequence is playing, the envelope settings can be manipulated to vary playback, but the abattoir also has a Speed control that makes it possible to vary the playback speed of the recorded sequence. Also, the break/make toggle switch can be used to play the “opposite” of what you recorded (the ground to your figure).

The bottom toggle switch is used to bypass the effect (left=off).

In February of 2010, Rick Walker posted to the Looper’s Delight mailing a description of a pedal he had designed with Bill Putnam. Rick wanted a pedal “that could utilize a hand drummer or string or wind instrumentalists’ ability to move their fingers rapidly, either in arpeggiation modes, static ostinato rhythms or even just randomly” and that could be used to “glitch silence into an already existing sound file or to take a random ambient loop as a sound source and be able to constrain it to a very articulate rhythm.” Needless to say, this was music to my ears and I, among many other musicians, was eagerly awaiting the release of the “Walker Manual Glitch Pedal."

While we still wait for this for this novel instrument, I had the notion last year of trying to implement some of its features in a design of my own. The pedal I would end up building a year later, while sharing some similarities, bears little resemblance to the original specification as described by Rick and perhaps owes more to recent pedals such as the Electro-Harmonix Chillswitch and the Dwarfcraft Memento. Many of the “Walker Manual Glitch Pedal” are unfortunately nowhere to be found in my design, such as: multiple buttons to allow finger drumming, onboard pink and white noise generators and filter with sweepable frequency and resonance. Oh well… I guess Rick will have to build his pedal! I know I’ll be first line to buy one if it ever comes out.